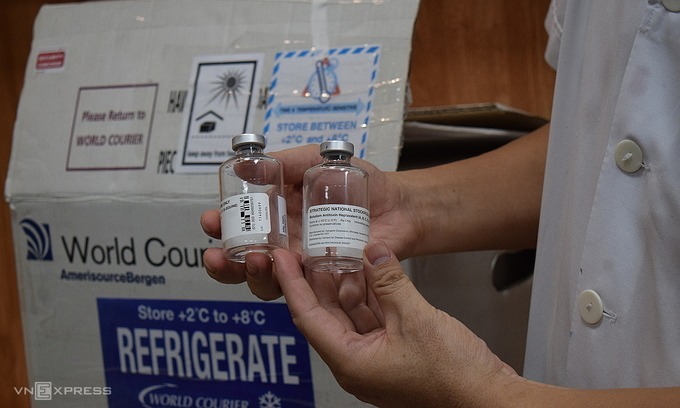 Two vials of botulinum antidotes in Hanoi’s Bach Mai Hospital, August 2020. Photo by VnExpress/Chi Le.A 42-year-old woman has died and two others are in critical condition in HCMC after consuming vegan food that might have been contaminated with the botulinum toxin.

The woman, her 16-year-old daughter and 53-year-old sister had bowls of rice vermicelli on March 20. Among its ingredients was pate from an inflated can, indicating possible contamination.

All three women later developed symptoms of muscle weakness, respiratory and circulatory failure. They were rushed from the southern province of Binh Duong to the 115 People’s Hospital in HCMC. While one woman died, the other two were in critical condition as of Thursday.

A doctor at the hospital said the womens’ clinical symptoms seemed to indicate botulism, a potential fatal disease, though a definite cause was yet to be confirmed. Two vials of botulinum antidotes were brought from Hanoi’s Bach Mai Hospital to HCMC Thursday night for treatment.

The HCMC Department of Health has requested citizens to stop consuming any food related with vegan pate until more information is available.

Anyone who has consumed vegan pate with the three women need to go to the nearest hospital for monitoring and treatment, the department said.

Botulinum has been implicated in several food poisoning incidents in Vietnam. Earlier this month, two people died in the Central Highlands province of Kon Tum Province following a feast at a traditional festival, where several dishes were found infected with the Clostridium botulinum bacteria, which are responsible for producing botulinum.

Last year, at least 16 people suffered botulism after consuming vegan pate produced by a Hanoi food company. A 70-year-old man died, while several others survived on ventilators for months after.

Botulinum, the deadliest toxin known to man, is produced by the Clostridium botulinum bacteria under low-oxygen conditions. Botulinum toxins are ingested through food in which the bacteria or their spores survive, then grow and produce the toxins.

Symptoms usually appear within 12 to 36 hours of food consumption. They include stomach-ache, fatigue, muscle pain, blurred vision, dry mouth, difficulty in swallowing and speaking and droopy eyelids. Patients can end up with respiratory failure caused by paralyzed respiratory muscles, or even death.

Except the recent cases, Vietnam has not recorded any botulinum poisoning in the past three decades.Related News: