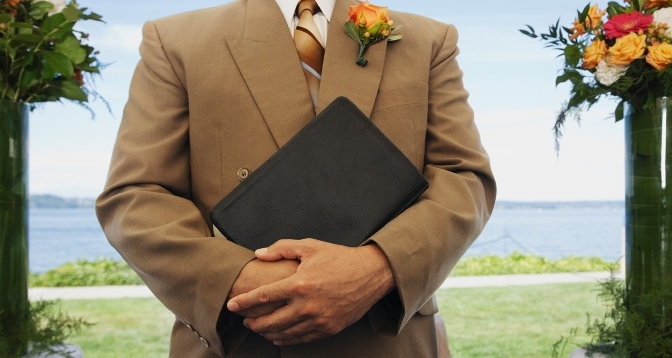 For years, those in favor of same-sex marriage have argued that all Americans should be free to live as they choose. And yet in countless cases, the government has coerced those who simply wish to be free to live in accordance with their belief that marriage is the union of a man and a woman.

Ministers face a 180-day jail term and $1,000 fine for each day they decline to celebrate the same-sex wedding.

Just this weekend, a case has arisen in Idaho, where city officials have told ordained ministers they have to celebrate same-sex weddings or face fines and jail time.

The Idaho case involves Donald and Evelyn Knapp, both ordained ministers, who run Hitching Post Wedding Chapel. Officials from Coeur d’Alene, Idaho, told the couple that because the city has a non-discrimination statute that includes sexual orientation and gender identity, and because the 9th U.S. Circuit Court of Appeals struck down Idaho’s constitutional amendment defining marriage as the union of a man and a woman, the couple would have to officiate at same-sex weddings in their own chapel.

On Friday, a same-sex couple asked to be married by the Knapps, and the Knapps politely declined. The Knapps now face a 180-day jail term and $1,000 fine for each day they decline to celebrate the same-sex wedding.

A week of honoring their faith and declining to perform the ceremony could cost the couple three and a half years in jail and $7,000 in fines.

The Knapps have been married to each other for 47 years and are both ordained ministers of the International Church of the Foursquare Gospel. They are “evangelical Christians who hold to historic Christian beliefs” that “God created two distinct genders in His image” and “that God ordained marriage to be between one man and one woman.”

But as a result of the courts redefining marriage and a city ordinance that creates special privileges based on sexual orientation and gender identity, the Knapps are facing government coercion.

Governmental recognition of same-sex relationships as marriages need not and should not require any third party to recognize a same-sex relationship as a marriage. Government should respect the rights of all citizens. Indeed, a form of government respectful of free association, free contracts, free speech and free exercise of religion should protect citizens’ rights to live according to their beliefs about marriage.

The Knapps have been celebrating weddings in their chapel since 1989. Government should not now force them to shut down or violate their beliefs.

After all, protecting religious liberty and the rights of conscience does not infringe on anyone’s sexual freedoms. No one has a right to have the government force a particular minister to marry them. Some citizens may conclude that they cannot in good conscience participate in same-sex ceremonies, from priests and pastors to bakers and florists. They should not be forced to choose between strongly held religious beliefs and their livelihood.

What Can Be Done

At the federal level, Congress has an opportunity to protect religious liberty and the rights of conscience.

Government should not now force ordained ministers to shut down or violate their beliefs.

Policy should prohibit the government from discriminating against any individual or group, whether nonprofit or for-profit, based on their beliefs that marriage is the union of a man and woman or that sexual relations are reserved for marriage. The government should be prohibited from discriminating against such groups or individuals in tax policy, employment, licensing, accreditation or contracting.

The Marriage and Religious Freedom Act—sponsored by Rep. Raul Labrador, R-Idaho, in the House (H.R. 3133) with more than 100 co-sponsors of both parties, and sponsored by Sen. Mike Lee, R-Utah, in the Senate (S. 1808) with 17 co-sponsors—would prevent the federal government from taking such adverse actions.

Indeed, Idaho has a RFRA, called the Free Exercise of Religion Protected Act (FERPA). State RFRAs prevent the imposition of substantial burdens on sincere religious beliefs unless the government proves that such a burden advances a compelling government interest that has been pursued through the least restrictive means possible.

It is unclear how the city could claim that forcing the Knapps to perform a same-sex wedding is a compelling government interest being pursued in the least restrictive way. There are numerous other venues where a same-sex couple could get married. Indeed, there is a county clerks office directly across the street from the chapel.

States must protect the rights of Americans and the associations they form—both nonprofit and for-profit—to speak and act in the public square in accordance with their beliefs. It is particularly egregious that the city would coerce ordained ministers to celebrate a religious ceremony in their chapel. The Alliance Defending Freedom has filed a motion arguing that this action “violates [the Knapps’s] First and 14th Amendment rights to freedom of speech, the free exercise of religion, substantive due process, and equal protection.”

Citizens must work to prevent or repeal laws that create special privileges based on sexual orientation and gender identity. We must also insist on laws that protect religious freedom and the rights of conscience.

Protecting religious liberty and the rights of conscience is the embodiment of a principled pluralism that fosters a more diverse civil sphere. Indeed, tolerance is essential to promoting peaceful coexistence even amid disagreement.