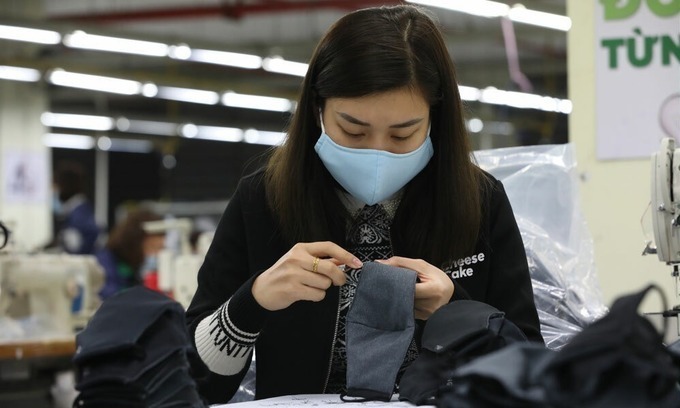 A worker manufactures face masks at a factory in Hanoi. Photo by VnExpress/Ngoc Thanh

The government’s target of having 1.5 million enterprises by 2025 seems unattainable, National Assembly’s Committee on Economy has said.

The government’s plan to restructure the economy in 2021-25 includes a target of 60,000-70,000 small- and medium-sized enterprises by that year, and the private sector contributing some 55 percent of GDP.

Appraising the plan on Tuesday the committee said the target seems unfeasible. Its head, Vu Hong Thanh, said the Covid-19 pandemic has hit businesses hard, forcing many to suspend operations, wind up or go bankrupt.

According to the General Statistics Office, some 90,000 left the market in the first nine months of this year.

The committee proposed amending the targets as the pandemic continues to affect the economy.

Minister of Planning and Investment Nguyen Chi Dung acknowledged the difficulty in achieving the 1.5-million target.

Five years ago the government set a target of having one million enterprises by 2020, but it was not attained. There are only 820,000 now.

The plan envisages completely restructuring state-owned enterprises by 2025, thoroughly addressing their shortcomings and lack of profitability, and increase the country’s stock market capitalization to GDP ratio to at least 85 percent.

National Assembly Chairman Vuong Dinh Hue said the Ministry of Finance and the State Bank of Vietnam should seek ways to expand the government and corporate bond markets.

The ministry is planning to issue more government bonds, he added.