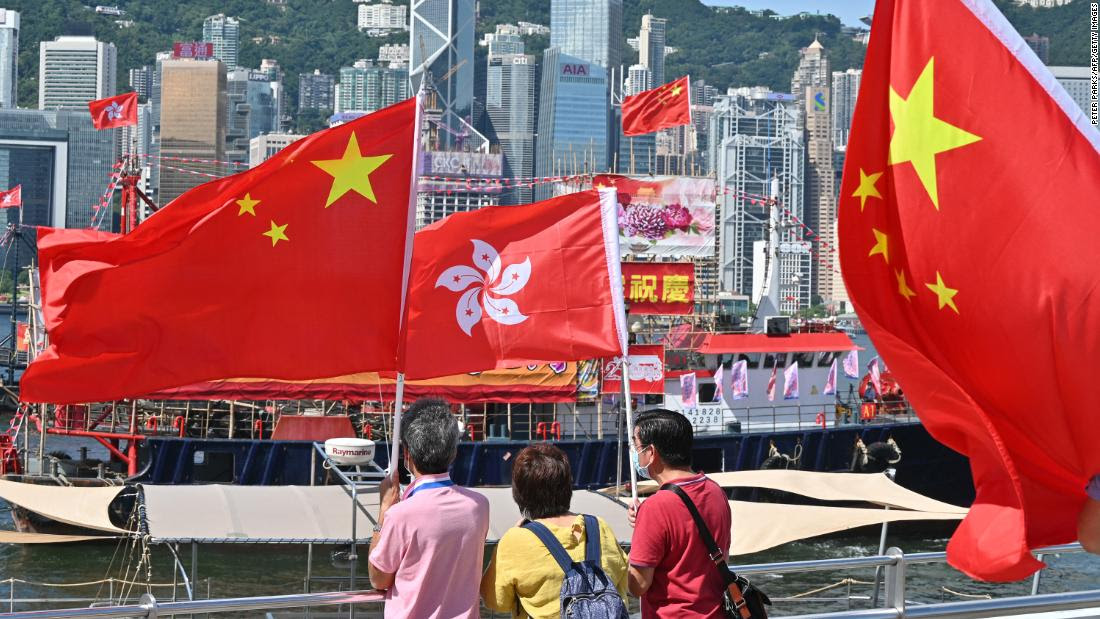 In his first trip outside mainland China since the start of the pandemic, Xi arrived in Hong Kong Thursday to mark the 25th anniversary of its return to Chinese rule on July 1 — a highly symbolic event at a pivotal time for both the city, and Xi himself.

The former British colony is midway through the 50-year promise of “a high degree of autonomy,” given by Beijing under a framework known as “one country, two systems.” On Friday, it also swore in its newly appointed leader, hardline former police officer John Lee. Xi, meanwhile, is only months away from finishing his first decade in power — and is widely expected to seek an unprecedented third term at a key meeting of the ruling Communist Party this fall.

The two-day trip is a timely declaration of political victory for Xi, who has brought Hong Kong to heel with a sweeping national security law following the 2019 anti-government protests. In just two years, critics say, the law has been used to crush the city’s opposition movement, overhaul its electoral system, silence its outspoken media and cripple its once-vibrant civil society.

The Hong Kong government has repeatedly denied the national security law is suppressing freedoms. Instead, it insists the law has ended chaos and restored stability to the city. For an authoritarian leader obsessed with stability, Hong Kong may now feel more like home than ever. Unlike his previous visits to the city, Xi no longer needs to worry about any public expression of dissent — be it critical headlines on local newspaper front pages, protest slogans on billboards or mass rallies in the streets.

Instead, he was surrounded by only “patriotic” officials, loyal tycoons and a blanket of heavy security measures — including extensive roadblocks and a citywide ban on drones. He was separated from the public by a meticulously maintained “closed loop” system — put in place to protect him against the city’s rising Covid-19 infections.

In a sign of the heightened security, journalists from at least seven media organizations, including CNN, were blocked from covering the ceremony days before the event, after initially receiving accreditation. Beijing’s supporters say Hong Kong has ushered in a “new era of stability, prosperity and opportunity.”

“This is an important milestone for our nation and Hong Kong,” the city’s government said in a statement marking the anniversary. “(It) not only captures Hong Kong’s impressive achievements over the past two and a half decades, it also underscores our eager anticipation for and confidence in a brighter future.” But critics fear Hong Kong is being increasingly reshaped in China’s image. To some, the “one country, two systems” experiment is already dead — 25 years ahead of schedule.

“One country, two systems” Proposed by late paramount leader Deng Xiaoping, “one country, two systems” is a political formula originally intended to help China achieve unification with Taiwan, a self-ruling democracy with a capitalist economy. But it ended up being first applied to Hong Kong, with the hope that it would set a desirable example for Taiwan to follow later. The governance model allows a capitalist bubble to coexist within a socialist country, with a pledge that Hong Kong’s capitalist system and way of life will remain unchanged for 50 years.

When Margaret Thatcher visited Beijing in 1984 to sign the Sino-British Joint Declaration for the handover of Hong Kong, Deng assured the British Prime Minister that “China will always keep its promises.” “When we gave the figure of 50 years, we were not speaking casually or on impulse, but in consideration of the realities in China and of our need for development,” he told Thatcher.

Upon his arrival in Hong Kong on Thursday, Xi called the “one country, two systems” a “good system.” “Facts have proved that ‘one country, two systems’ has strong vitality. It can ensure Hong Kong’s long-term prosperity and stability, and safeguard the well-being of Hong Kong compatriots,” Xi said inside the West Kowloon Station. “Over the past few years, Hong Kong has withstood one severe test after another and overcome one risk and challenge after another. After weathering the storms, Hong Kong has emerged from the ashes with vigorous vitality,” he said.

But critics, including Hong Kong’s last British governor Chris Patten, have accused Beijing of breaching those promises in recent years as it tightened its grip on Hong Kong. “It’s fair to say for 10 years after 1997, maybe a bit longer, things did not go too badly wrong, but they’ve gone downhill since, partly because Xi Jinping and his colleagues are terrified of what Hong Kong actually stands for,” Patten said at a press conference last week.

Since coming to power, Xi has waged an ideological war against the influence of “Western values” such as constitutional democracy, press freedom, judicial independence and universal human rights — notions that have long been cherished in Hong Kong and formed an integral part of its identity. The city’s pursuit of full democracy, namely ultimately electing its leader by universal suffrage — a goal written into its mini-constitution, the Basic Law — is especially viewed with suspicion by Beijing, which is worried that a freely elected leader could pose a challenge to its authority. As Beijing dragged its feet on electoral reforms, Hong Kong’s pro-democracy advocates lost patience. In 2014, thousands of young protesters occupied key roads in the city’s financial center to demand “true universal suffrage” — rejecting a proposal by China’s parliament to have the candidates vetted in advance by a pro-Beijing committee. The peaceful protests, known as the “Umbrella Movement,” ended after 79 days, with none of their demands met.

Since then, Beijing has sought to exert more control over Hong Kong. During his first visit to the city as China’s leader in 2017, Xi warned that any efforts to “challenge the power” of the central government were “absolutely impermissible.” “Any attempt to endanger China’s sovereignty and security…or use Hong Kong to carry out infiltration and sabotage activities against the mainland is an act that crosses the red line,” he said in a speech on Hong Kong’s 20th handover anniversary.

But Beijing’s tightening grip only intensified discontent in the city, especially among its younger generation — many of whom fear they are running out of time to fight for democracy before the 2047 deadline. Some tried to push for change by joining the city’s legislature, but that failed too under increasing pressure from Beijing. A slew of pro-democracy lawmakers were disqualified over an oath-taking controversy, while other candidates were barred from standing for office. Long-running tensions eventually erupted in 2019. Over that summer, peaceful marches against a proposed bill that would allow the extradition of criminal suspects to mainland China soon snowballed into sometimes violent anti-Beijing protests, plunging the city into months of social unrest and its most tumultuous period since the handover.

A year later, during a lull in the protests brought by the pandemic, Beijing bypassed the city’s legislature to impose a national security law, which took effect the day before the July 1 handover anniversary. In vaguely defined terms, the law criminalizes secession, subversion, terrorism and collusion with foreign forces — and allows for maximum sentences of life imprisonment.

Since then, crackdown measures that would have been previously unthinkable have arrived at a dizzying speed, drastically transforming Hong Kong’s political and social landscape. Nearly all of the city’s leading pro-democracy figures, including activists and politicians, have either been jailed or forced into exile. No opposition lawmakers are left in the legislature, which now allows only “patriots” to run for office. The city’s most outspoken newspaper, Apple Daily, has been shuttered, followed by a number of smaller pro-democracy outlets, while dozens of civil society groups, from unions and churches to activist groups, have disbanded. Memories of the 1989 Tiananmen Square massacre, from statues to annual commemoration vigils, are being erased from public spaces. Tens of thousands of citizens are voting with their feet, emigrating to democratic countries such as the United Kingdom, Canada and Australia.

Responding to CNN’s request for comment on the city’s diminishing freedoms, a spokesperson for the Hong Kong government said: “Many freedoms and rights are not absolute, and can be restricted for reasons including protection of national security and public safety.” But Xi’s transformation of Hong Kong is not only about chipping away the freedoms it once had — it also seeks to reshape the city in China’s image and connect it more deeply with the motherland.

Starting from this year, schools, including some kindergartens, are required to hold a ceremony to raise the national flag at least once a week, where the national anthem must be played and sung. In classrooms, national security education has been introduced to the curriculum to “develop in students a sense of belonging to the country, an affection for the Chinese people, a sense of national identity,” while books by pro-democracy figures, or others that are deemed politically sensitive, have been removed from the shelves of public libraries.

Hong Kong police are now adopting the goose-stepping marching style of the Chinese army, abandoning the British style they have used since the colonial area. Days ahead of the 25th handover ceremony, the Wong Tai Sin temple, a Taoist shrine popular with local worshipers, became the first religious premise to hold a flag-raising ceremony in Hong Kong, after building a permanent platform for the Chinese and Hong Kong flags. Under Xi, Chinese flags have become ubiquitous at temples, churches and mosques across mainland China. Hong Kong officials speak proudly of efforts to embed Hong Kong deeper into China’s national economic master plans, including developing the Greater Bay Area — a region Beijing hopes will one day rival the bay areas of San Francisco, New York and Tokyo.

In 2018, Xi officiated the opening of the Hong Kong-Zhuhai-Macau Bridge, the longest sea-crossing bridge ever built. The same year, the West Kowloon Station opened, connecting Hong Kong with the mainland by high-speed rail. Since the pandemic, however, both projects have lain mostly idle, due to strict border controls between Hong Kong and mainland China — the last places in the world still adhering to a stringent zero-Covid strategy. Xi crossed that border four times in his two-day trip, as he spent the night in Shenzhen — without being subject to centralized quarantine like ordinary travelers. Meanwhile, across the border in Hong Kong, thousands of officials, guests and staff quarantined for days in the city’s hotels, merely to attend the ceremony. Xi’s visit may be historic on many fronts, but for many Hong Kongers, his presence has only confirmed how much has changed in so little time.