‘Years of economic mismanagement’: Why Sri Lanka has a fuel crisis 05:11

(CNN Business)In Sri Lanka, people queue for miles to fill a tank of fuel. In Bangladesh, shops shut at 8 p.m. to conserve energy. In India and Pakistan, power outages force schools to shut, businesses to close and residents to swelter without air conditioning through deadly heat waves in which temperatures top 100 degrees Fahrenheit (37 degrees Celsius).

These are just some of the more eye-catching scenes playing out in the Asia Pacific region, where various countries are facing their worst energy crisis in years — and grappling with the growing discontent and instability caused by knock-on increases in the cost of living.

In Sri Lanka and Pakistan, the sense of crisis is palpable. Public anger has already caused a wave of ministers to resign in Colombo and contributed to Imran Khan’s downfall as prime minister in Islamabad.

Yet many suspect the political reckoning has only just begun; both countries have been forced into desperate measures, going cap in hand to the International Monetary Fund and introducing shorter working weeks in an effort to save energy. On Wednesday, Prime Minister Ranil Wickremesinghe said the Sri Lankan economy had “completely collapsed.”

Elsewhere in the region, the signs of trouble may be less obvious but could yet have far reaching consequences. Even in comparatively rich countries, such as Australia, economic concerns are beginning to emerge as consumers feel the pinch of higher energy bills.

Wholesale electricity prices in the first quarter of 2022 were up 141% from last year; households are being urged to cut down usage and on June 15 — for the first time — the Australian government suspended indefinitely the national electricity market in a bid to bring prices down, ease pressure on the energy supply chain and prevent blackouts.

Enter your email to subscribe to the CNN Business Newsletter.

Get essential news and analysis on global markets with CNN Business’ daily newsletter.Sign Me UpNo Thanks

By subscribing you agree to our

But it is the experience of India, where power demand recently hit record highs, that illustrates most clearly why this is a global — rather than regional — crisis.

Having suffered through widespread outages amid record temperatures, the world’s third-largest carbon emitter announced on May 28 that state-run Coal India will import coal for the first time since 2015. 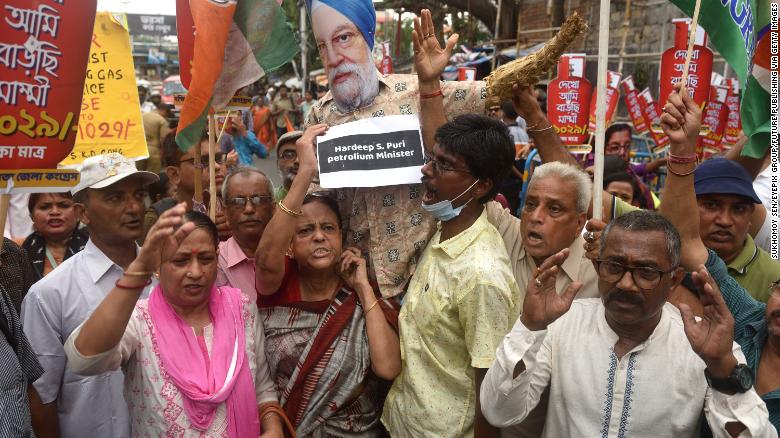 While each of these countries faces a unique set of circumstances, all have been hit by the twin effects of the coronavirus pandemic and Russia’s war in Ukraine — two unforeseeable events that have turned on their heads previously reasonable assumptions about supply lines and regional security and in the process plunged the world of economic planning into chaos.

At root, experts say, the problem lies in a growing mismatch between supply and demand.

Over the past couple of years, the pandemic kept demand for energy unusually low, with global electricity consumption dropping by more than 3% in the first quarter of 2020 as lockdowns and other restrictions kept workers at home, cars off the road, and ships stuck in ports.

But now, as nations begin to put the pandemic behind them, demand for fuel is spiking — and the sudden competition is pushing the prices of coal, oil and gas to record highs.

Turbo-charging this trend is the invasion of Ukraine by Russia, the world’s third largest oil producer and second largest crude oil exporter. With the United States and many of its allies sanctioning Russian oil and gas, many countries have been left scrambling to find alternative sources — heating up the competition for limited supplies even further.

“Energy demand has rebounded quite quickly from the coronavirus and more quickly than supply,” said Samantha Gross, director of the Brookings Institute’s Energy Security and Climate Initiative.

“So we saw high prices even before Russia’s invasion of Ukraine (but then there was) really a shock to energy supply. Various actions taken in response to that are really a challenge for energy supply globally.”

While the price of energy imports has risen dramatically across the world, with international coal prices five times higher than a year ago and natural gas prices up to 10 times higher than last year, experts say there are reasons some Asian economies — particularly import-reliant, developing ones — have been hit hardest.

“If you’re a country, especially an emerging economy like a Sri Lanka that has to buy those commodities, has to buy oil, has to buy natural gas, this is a real struggle,” said Mark Zandi, chief economist at Moody’s Analytics.

Poorer countries that are still developing or newly industrialized are simply less able to compete with more deep pocketed rivals — and the more they need to import, the bigger their problem will be, said Antoine Halff, adjunct senior research scholar at Columbia University’s Center on Global Energy Policy.

“So Pakistan certainly fits there. Sri Lanka I think fits there as well,” he said. “They’re taking the price hit but they’re also taking the supply hit. They have to pay more for their energy supplies and in some countries like Pakistan, they actually have a hard time sourcing energy.”

Canaries in the coal mine

This dynamic is behind the increasingly chaotic scenes playing out in those countries.

As recently as a week ago, Sri Lanka’s power and energy minister said it was a matter of days before the country ran out of fuel. That bleak warning came as lines at fuel stations in Colombo extended up to 3 kilometers (nearly 2 miles) and in many towns clashes between police and the public broke out.

It is almost as if everyday life itself is shutting down. On Monday, public sector offices, government schools and government-approved private schools were closed for at least two weeks. Public sector workers have been told to take Fridays off for the next three months — with the suggestion they use the time to grow their own food.

Pakistan too has had to reduce its working week — back down to five days from six — though that may only make the situation worse. Its six-day week, only recently introduced, was supposed to improve productivity and boost the economy.

Instead, daily hours-long power outages have plagued the country of 220 million for at least a month and malls and restaurants in Pakistan’s largest city of Karachi have been told to close early to save fuel.

The country’s energy supply is almost 5,000 megawatts below demand — a shortfall that could power between 2 million and 5 million homes on some estimates.

As Information Minister Marriyum Aurangzeb put it on June 7: “We are facing a severe crisis.” 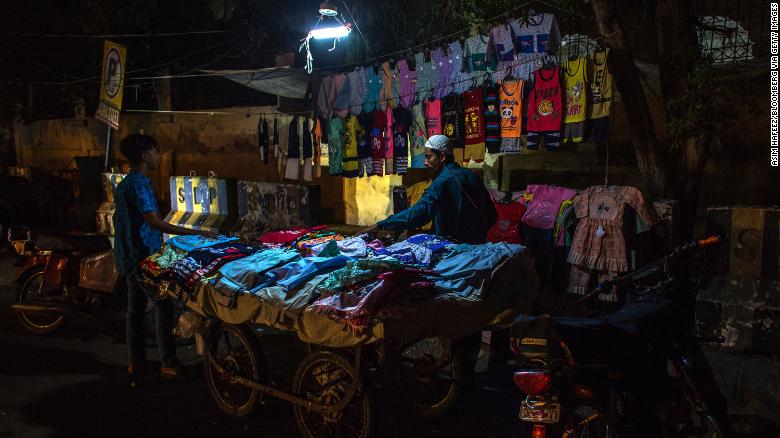 A vendor sells fabrics under an emergency light connected to a motorcycle during a load-shedding power outage in Karachi, Pakistan on June 8.

And any notion that such problems are a matter only for poorer, less developed nations is dispelled by the experience of Australia — a country that has one of the world’s highest levels of global median wealth per adult.

Since May, the “Lucky Country” has been operating without 25% of its coal-based energy capacity — partly due to planned outages for maintenance, but also because supply disruptions and soaring prices have caused unplanned outages.

Like their counterparts in Pakistan and Bangladesh, Australians are now being urged to conserve, with Energy Minister Chris Bowen recently asking households in New South Wales, which includes Sydney, not to use electricity for two hours each evening.

A bigger problem ahead

How these nations respond may be stirring up an even greater problem than rising prices.

Under pressure from the public, governments and politicians may be tempted to turn back toward cheaper, dirtier forms of energy such as coal, regardless of the effect on climate change.

And there are signs this may already have started.

In Australia, the federal government’s Energy Security Board has proposed that all electricity generators, including coal-fired ones, be paid to keep extra capacity in the national grid in a bid to prevent power outages. And the government of New South Wales has used emergency powers to redirect coal from mines in the state to local generators rather than overseas.

Both measures have come in for criticism from those who accuse the government of betraying its commitment to renewable energy.

In India, a country of 1.3 billion people that relies on coal for about 70% of its energy generation, New Delhi’s decision to increase coal imports is likely to have even more profound environmental effects.

Scientists say a drastic reduction in coal mining is necessary to limit the worst effects of global warming, yet this will be hard to achieve without the buy-in of one of the world’s biggest carbon emitters.

“Any country, be it India, be it Germany, be it the US, if they double down on any kind of fossil fuel it will eat up the carbon budget. That’s a global problem,” said Sandeep Pai, senior research lead for the Center for Strategic and International Studies’ Energy Program.

While Pai said that India’s decision might only be a temporary “reaction to the crisis,” if in one or two years’ time countries were continuing to rely on coal this would significantly affect the war on global warming.

“If these actions happen, it will eat up the carbon budget which is already shrinking in India and the target of 1.5 or 2 degrees will become increasingly hard,” Pai said, referring to the Paris Climate Agreement’s goal of keeping the rise in global average temperature between 1.5 and 2 degrees Celsius.

If the rise in temperature exceeds that range, even temporarily, scientists suggest some of the resulting changes to the planet could be irreversible.

As Pai put it: “India’s scale and size and demand means that if it really doubles down on coal, then we’ll have a really serious problem from a climate point of view.”