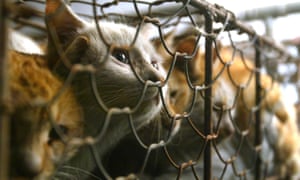 People in Taiwan who repeatedly eat dog or cat meat face being named and shamed under the new law. Photograph: AP

Taiwan is set to become the first country in Asia to ban the consumption of dog and cat meat, as increasing pet ownership across the continent has seen attitudes shift.