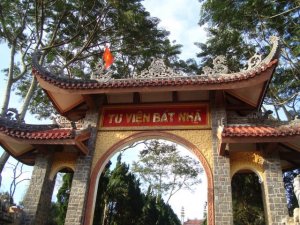 This problem has been here a month. 400 monks in tu viện Bát Nhã are living without electricity and water, and they have to rely on the villagers’ supplies.

Here is the article on Giác Ngộ. And here is the BBC article.

Briefly, Zen master Thích Nhất Hạnh’s group in France spent their own money to build monastery Bat Nha in Bao Loc and put 400 young monks there, under the leadership of abbot Thich Duc Nghi. Now Thich Duc Nghi said he cannot sponsor the young monks anymore, and they have to leave Vietnam. The police is saying that this is an internal problem between Thich Duc Nghi group and Thich Nhat Hanh group.

If you read a bit about this case, you must have a very low IQ level to believe that this is strictly an internal private affair, and that the government has nothing to do with it.

My sense is that Thich Nhat Hanh wants to do things the way it is done in France or other places outside Vietnam–i.e., ordaining monks freely, without the need for government approval; running the monastery independently, without belonging to any government-approved religious organization, etc… And of course, that cannot be done in Vietnam and would put (or has put) Thich Duc Nghi in a very difficult position.

I am confident that my sense about this case is correct.

What do I say to this?

I say, Vietnam needs to be more sophisticated in managing religious organizations. It is not that hard to give them a lot more freedom while still having enough government control to keep them in line.

But someone in the government would have to have some sophistication first.

About Zen master Thich Nhat Hanh’s group, I hope they understand that when you are in a country, you follow the law of that country. If you don’t like the law, follow it anyway, and lobby to change it later.

Or don’t enter the country at all. You can’t come in and ignore the law. That is not how the world operates.

What do you, brothers and sisters, say?