In 2016, let’s hope for better trade agreements – and the death of TPP 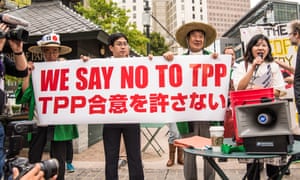 Last year was a memorable one for the global economy. Not only was overall performance disappointing, but profound changes – both for better and for worse – occurred in the global economic system.

Most notable was the Paris climate agreement reached last month. By itself, the agreement is far from enough to limit the increase in global warming to the target of 2ºC above the pre-industrial level. But it did put everyone on notice: the world is moving, inexorably, toward a green economy. One day not too far off, fossil fuels will be largely a thing of the past. So anyone who invests in coal now does so at his or her peril. With more green investments coming to the fore, those financing them will, we should hope, counterbalance powerful lobbying by the coal industry, which is willing to put the world at risk to advance its shortsighted interests.