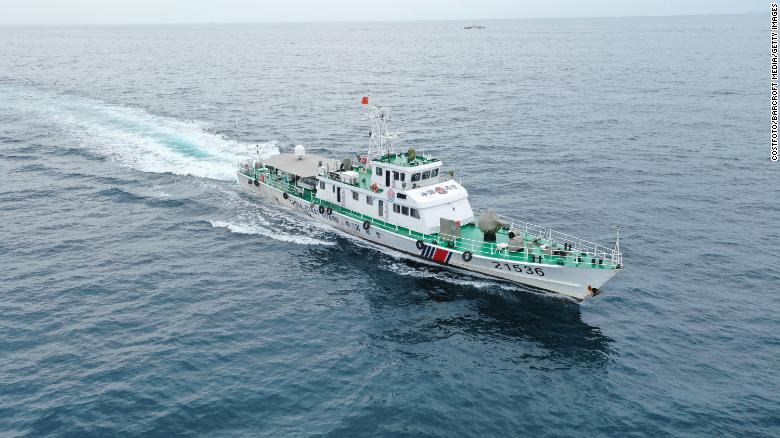 A version of this story appeared in CNN’s Meanwhile in China newsletter, a three-times-a-week update exploring what you need to know about the country’s rise and how it impacts the world. Sign up here.

Hong Kong (CNN)Beijing wants foreign vessels to give notice before entering “Chinese territorial waters,” providing maritime authorities with detailed information — including the ship’s name, call sign, current position, next port of call and estimated time of arrival.It may sound like a reasonable enough request, especially if the ship is carrying hazardous goods, that is until you consider what constitutes “Chinese territorial waters.”Beijing asserts sovereignty over vast swathes of the South China Sea, under its widely contested and far-reaching nine-dash line, as well as disputed islands in the East China Sea.

Begging the question, will China try to enforce the new law in disputed seas? If it does, Pacific powers like Japan and the United States almost certainly won’t comply. And in such a scenario, the question quickly becomes, how will China react?

However, the regulations lack specifics and Western analysts say they skirt close to countering the United Nations Convention on the Law of the Sea, which guarantees a coastal state will not hamper the right of passage of foreign vessels if they don’t threaten a nation’s security.”

This looks like part of China’s strategy of casting legal nets over areas that it claims … to ‘normalize’ these claims,” said Robert Ward, senior fellow for Japanese security studies at The International Institute for Strategic Studies in London.

“Enforcement will be difficult, but this may matter less for Beijing than the slow accumulation of what it sees as a legal underpinning,” Ward said.

The new regulations are the second such instance of Beijing attempting to provide a legal justification for its maritime reach this year, following a law introduced in February that allows the Chinese Coast Guard to use weapons to protect China’s national sovereignty, an action previously reserved for units of the People’s Liberation Army.

The main focus of both of China’s new legal claims is widely considered to be the South China Sea, almost all of which Beijing claims as its sovereign territory, despite overlapping claims by the Philippines, Vietnam, Malaysia, Brunei, Indonesia and Taiwan.

The US Coast Guard’s top commander in the Pacific, Vice Adm. Michael McAllister, on Friday called the new law “very concerning,” telling CNN that if enforced, it “begins to build foundations for instability and potential conflicts” in the South China Sea.

The US has shown a staunch unwillingness to comply with China’s demands in the region, routinely carrying out freedom of navigation operations, which challenge Beijing’s claims to disputed islands. During a speech in Singapore in July, US Secretary of Defense Lloyd Austin pushed back against what he described as China’s illegitimate claims to the vast resource-rich waterway.

But the more volatile area may be in the East China Sea, and the waters around the Japanese-held Senkaku Islands, claimed by China as the Diaoyus.”Exercising coastal state rights is an important step in corroborating sovereignty through practice,” said Alessio Patalano, professor of war and strategy at King’s College in London. “But in spaces like the waters around the Senkaku Islands, a strict implementation of these navigational rules will inevitably lead to a clash with coast guard authorities of competing claimants like Japan.”

And, looking at the numbers, the forces that could precipitate a clash have been in place almost constantly this year.

According to Japan’s Coast Guard, Chinese Coast Guard vessels have been in Japan’s territorial waters — within 12 nautical miles of Japanese land — 88 times this year. In the contiguous zone — waters between islands but not within 12 miles of shore — there have been 851 Chinese incursions, the Japan Coast Guard says.

But China says its coast guard vessels are only patrolling its waters around its Diaoyu islands. According to Beijing, Japanese craft are the interlopers and China would be within its rights to use force to get rid of them.

Japan’s air force faces a ‘relentless’ burden, imposed by China“If the vessel is military and trespassing in China’s territorial waters without advance notice, it will be considered as serious provocation, and the Chinese military will take over to dispel or take even stronger measures to punish the invaders,” the state-owned Global Times nationalist tabloid reported this week, quoting a Chinese military expert.China has been ramping up legal pressure on the Senkakus since 2013, when it declared them part of an Air Defense Identification Zone (ADIZ), with requirements similar to the latest Maritime Safety Administration rules. And that ADIZ has not resulted in armed clashes.

But, as many analysts point out, combat often comes by mistake, not careful planning. A field commander eager to show his or her mettle, a mistaken order or miscommunication, a mechanical breakdown of a ship or plane — any could be a spark that ignites a conflict.And in the current state of bellicose rhetoric between China and Japan, and its ally the United States, once shots are fired, it could be hard to back down.