Counterfeit and poor-quality goods are the biggest obstacle that customers face on online shopping platforms.

Mr. Bao, a customer in Ho Chi Minh City, wanted to buy 2XU brand jogging pants. He ordered the pants on a popular e-commerce site for VND350,000 and after receiving the product, he found out that it was fake. 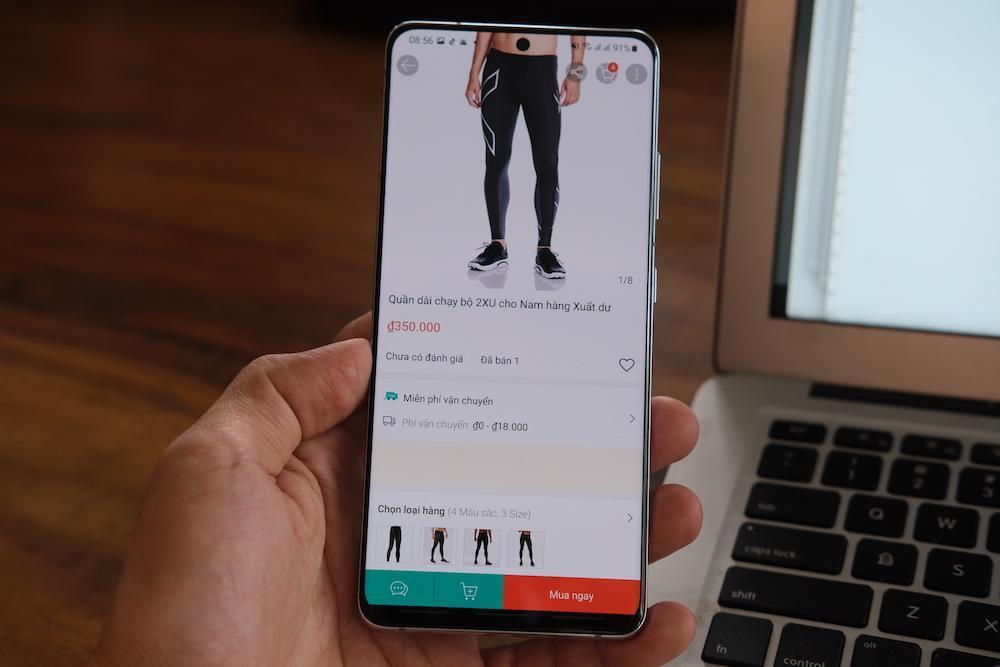 This sports pants advertised on an e-commerce site is cheaper than similar products sold at official stores. (Photo: H.D)

On most e-commerce platforms, sports clothing branded Nike and Adidas are priced at around VND100,000 ($4), 5-10 times cheaper than products sold at official stores. All of them are counterfeit.

According to a report by Reputa (Viettel’s online monitoring platform), fraudulent stores, wrong delivery, bad quality, and counterfeit goods are the main factors (46%) causing dissatisfaction among customers of major e-commerce floors in Vietnam.

According to statistics, in the first nine months of 2020, the market management agency inspected more than 2,400 cases, handled over 2,200 violations, and imposed fines worth over VND16 billion for violations on e-commerce sites. Some took advantage of e-commerce to sell smuggled, fake goods, goods of unknown origin, and goods infringing intellectual property rights with a value of about VND41 billion (nearly $2 million).

According to the Department of E-Commerce and Digital Economy of the Ministry of Industry and Trade, 463,865 online shops and nearly 1.8 million products were inspected in March 2020. About 5,200 shops with over 21,000 products were fined for violations.

The three main groups of counterfeit goods that trade mainly on online platforms include electronic and technology products; clothes, footwear, cosmetics; and houseware.

According to the World Customs Organization (WCO), counterfeit goods account for 7-9% of global trade.

A memorandum of understanding signed by former US President Donald Trump in 2019 stated that the value of counterfeit and pirated goods traded worldwide could increase to $500 trillion a year, with about 20% of these violating intellectual property laws of the US.

The convenience of online shopping platforms enables the trade of fake goods. Besides economic and loss of trust loss, counterfeiting certain products can also affect the health of consumers.

How do e-commerce floors combat counterfeiting?

In Vietnam, the most aggressive action of e-commerce floors against counterfeits is blocking accounts of sellers. Tiki commits to compensate 111% of the goods’ value to people who bought counterfeit and fake goods.

Representatives of popular e-commerce sites in Vietnam like Shopee, Lazada, and Tiki told VietNamNet that they have staff check goods, images and infringement of keyword filtering systems. However, many sellers have applied tricks to overcome these protective barriers.

Lazada said that in order to solve the root of the problem, it is necessary to have close coordination between e-commerce platforms with partner brands and law enforcement agencies.

“Lazada can provide evidence, but only law enforcement and the government have authority to take measures to permanently prevent the sale of counterfeit goods on e-commerce platforms,” a Lazada representative said.

Among major e-commerce sites in Vietnam, Tiki started from the B2C model, or goods sold by Tiki, so the quality control is guaranteed. In theory, counterfeit and fake goods are controlled on the site. However, Tiki has now applied the C2C model, which means it allows third parties to open shops, so the control of counterfeit goods is more difficult. The C2C model is also used by Shopee and Lazada.

E-commerce platforms must have anti-counterfeiting solutions

According to Reputa’s Vietnam e-commerce report 2020, the motivation for customers to shop online is their trust in that site (20.5%). This factor is just behind the delivery time (25.9%). At the same time, the main feedback on social networks about major e-commerce floors in Vietnam is also related to the issue of goods quality and fraud.

Therefore, combating counterfeiting is one of the most important issues for the development of e-commerce platforms.

In the US, former President Donald Trump last February signed a decree to prevent the sale of counterfeit goods from abroad to US citizens who shop online on Amazon.com, Walmart.com or other e-commerce websites. The US government asked Amazon, Walmart and other sites to take policies to ensure that the goods they sell are safe and legal. Four months later, Amazon formed an anti-counterfeiting team, including former prosecutors, investigators and analysts.

In Vietnam, the law on violations on e-commerce sites still lags behind the actual situation. The Ministry of Industry and Trade has proposed amending the Government’s Decree No. 52/2013/ND-CP on e-commerce.

In particular, the revised decree will strengthen the obligations of the owner of e-commerce floors to control and filter information, and bind their responsibility for transactions conducted on the floor by foreign sellers.