This week, we took to the streets to mark International Women’s Day. This year, we are thinking of Ukrainian and Russian women in particular. International Women’s Day is also a stark reminder that there’s still a very long road ahead to fulfilling the United Nation’s Sustainable Development Goals (SDGs), including SDG 5: “Achieve gender equality and empower all women and girls”, a cornerstone for making progress on the rest of the SDGs, including the goal to end poverty in all its forms, everywhere. Taking action to advance gender equality is therefore crucial.

Women are most affected by inequality, not least because they represent the largest proportion of people living in poverty. And corruption worsens these existing inequalities.

To take just one example, land corruption cuts women off from a resource they rely heavily on to survive. Such corruption takes many forms, from bribery to sextortion – like demands for sexual favours in return for access to land. This is often made worse by traditions that stop women from inheriting property, exclude them from participating in commercial deals, or mean they receive lower prices for the land they sell.

In short, land corruption undermines women’s livelihoods and social standing and perpetuates poverty. This is especially true in Sub-Saharan Africa, the continent ranked lowest on our Corruption Perceptions Index, where poverty levels and gender disparities have worsened during the COVID-19 pandemic.

To counter this, Transparency International is working in eight African countries to mobilise women to demand transparency and accountability in the land sector, and safely report corrupt practices. 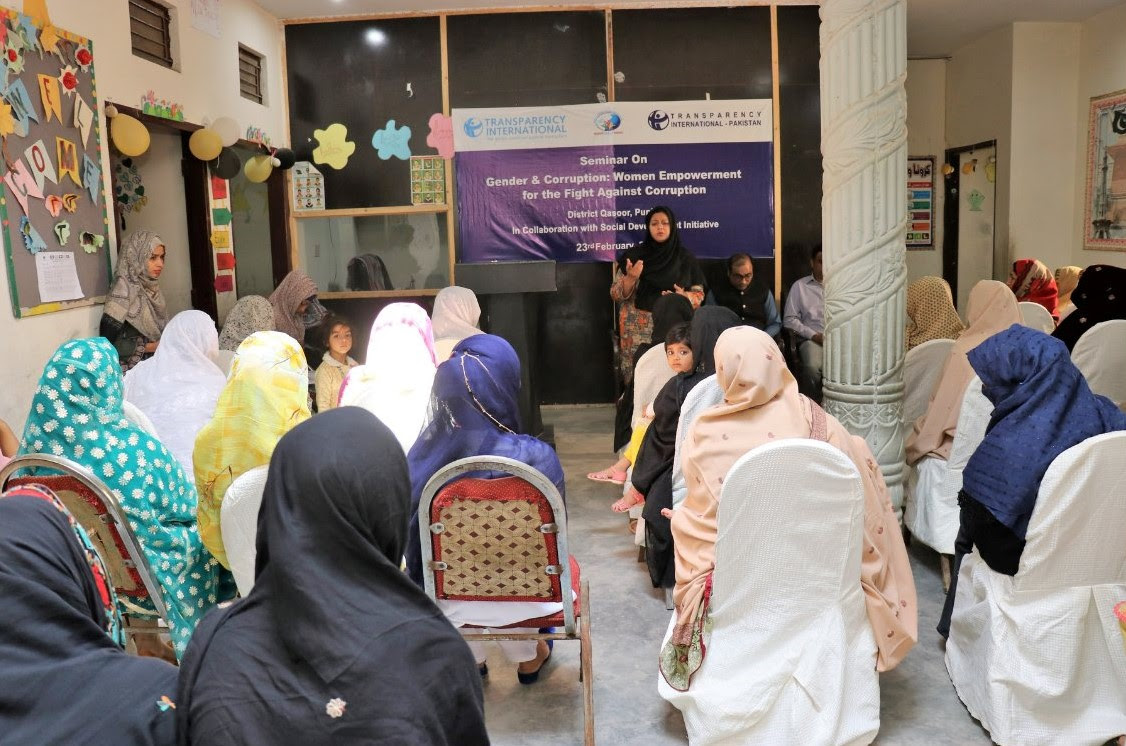 Women participating in a seminar on Gender and Corruption organised by Transparency International Pakistan.We also foster connections between existing action networks, so that people can join forces to pressure decision-makers to adopt laws and other measures against land corruption.

But even in countries where the laws do support women’s land rights, enforcement is often weak and women’s claims are frequently undermined or manipulated by men for their own gain.

Imagine this: in Pakistan, Bibi Sajida was left with nothing when her father passed away in 2016 – his property and money had been surreptitiously claimed by her four brothers. This is a common scenario in the country, even though women’s inheritance rights are protected by law.

Luckily, in 2020 Bibi Sajida came across Transparency International Pakistan’s Access to Justice campaign, which informs people like her of their rights. They helped her recover her part of the inheritance.

These stories not only start conversations about the persistence of gender-based corruption and discrimination locally and nationally, but they are also a reminder that anti-corruption policies and interventions cannot succeed unless they take gender into account. Gender equality is key to creating a more just and equitable world for all.
What do you think? Let us know @anticorruption.