The Guardian – Kim Jong-nam’s death is believed to have been an ordered hit. If so it would not be the first time citizens were targeted abroad 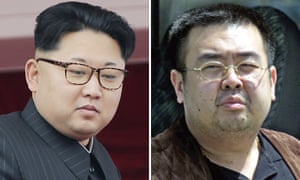 Kim Jong-nam was almost certainly murdered by North Korean agents, according to intelligence officials in South Korea, as suspicions mount that his assassination at Kuala Lumpur airport was ordered by his estranged half-brother, the North Korean leader, Kim Jong-un.