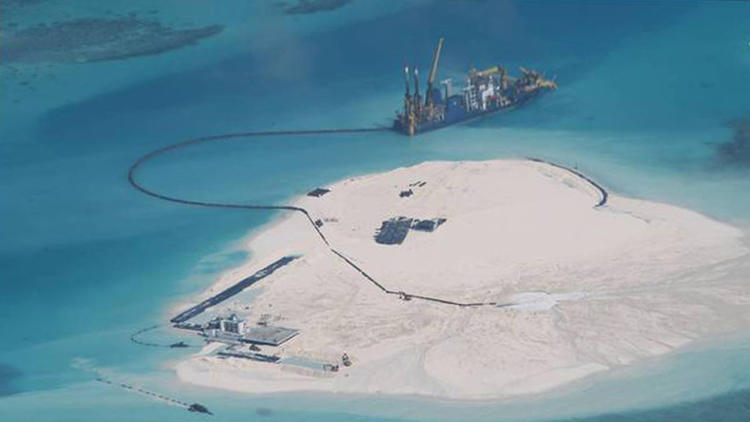 A Chinese vessel works on a building project in the Spratly Islands in 2014. New satellite images show that China has rapidly expanded its artificial islands in the South China Sea. (Philippine Department of Foreign Affairs)

latimes.com – China’s moves to explore for oil and undertake land reclamation projects on contested islets in the South China Sea have upset a number of its neighbors, including Vietnam. But none has taken a tougher stance against Beijing’s moves than the Philippines.

The archipelago has shaped up as the loudest voice in Southeast Asia against China’s show of strength in the Pacific. The Philippines has detained Chinese boats, arrested fishermen and lodged a formal United Nations protest against Beijing.

“If they think they can scare people here and have them change their minds about the sovereignty issue, I don’t think so,” said Ramon Casiple, a political commentator and executive director of the Philippine advocacy group Institute for Political and Electoral Reform. “The economic factors that are the basis for economic growth today are not based on China.”

The friction between China and the Philippines stems from decades-old competing claims to parts of the 1.4-million-square-mile South China Sea. Both nations fish there and want to lay claim to some of what the U.S. Energy Information Administration estimates is 11 billion barrels of oil and 190 trillion cubic feet of natural gas under the ocean floor.

China responded by reducing fruit imports from the Philippines and scaling back tourism to the archipelago.

In April 2014, Manila signed a 10-year Enhanced Defense Cooperation Agreement with the United States, allowing an unspecified number of American troops to be stationed in the Philippines. The United States had troops here for nearly a century until 1992, when they were withdrawn at the behest of officials in Manila who saw them as a throwback to colonialism.

“There’s something to be said for being militarily aligned with the United States that gives the Philippines a bit more gumption,” said Abigail Magalong, an analyst with U.S.-based, Southeast Asia-focused business consultancy Cascade Asia Advisors.

China was the Philippines’ No. 1 source of imported goods and its No. 3 export destination in 2013. But the $294-billion Philippine economy depends more on the service industry — such as call centers for Western multinationals — as well as remittances from millions of Filipino workers based overseas, from Dubai to the United States, but not mainland China.

After a Chinese national was shot in the Philippines in September, China cautioned its citizens against travel to the archipelago, which is only an hour’s flight from China’s south coast. Earlier that month, Philippine authorities had arrested three Filipinos suspected of planning a bomb attack against Chinese interests in Manila.

In November, the Philippines fined nine Chinese fishermen $103,000 apiece for poaching and taking endangered giant sea turtles from a tract of the disputed sea, stirring new anger against China and rekindling resentment of ethnic Chinese workers in the Philippines, from smugglers of fake goods in Manila’s markets to some of the country’s richest business people.

Two years ago, the Philippines made what may be its boldest move against China, generating support at home and among neighbors. It filed for arbitration in a United Nations court, arguing that China’s basis for claiming the disputed ocean was inconsistent with the U.N. Convention on the Law of the Sea.

Beijing has declined to meet the Philippines in the U.N. Permanent Court of Arbitration, saying the body lacks authority to settle South China Sea issues. Beijing has historically preferred bilateral talks over international dispute-resolution procedures. Manila is still pushing for a solution from the U.N. court.

“Manila, by pushing forward with the arbitral proceeding despite strong objection from Beijing, has been acting like a crying baby,” China’s official New China News Agency said in a December commentary.

Brunei, Malaysia, Taiwan and Vietnam claim full or partial sovereignty over the South China Sea, and Japan is sparring with China over claims to the East China Sea. Manila’s U.N. action “contributes to the maintenance and enhancement of the international order in the region based on the rule of law,” Japan’s foreign ministry said in a supportive statement last year.

Japan had agreed to work out a military base agreement with the Philippines in 2013 after Defense Minister Voltaire Gazmin called China a “bully at our doorstep.” Last year, Manila handed Tokyo a wish list of military equipment after Japan said it would revise policies that have long prohibited weapons exports.

“I think it is probably accurate to say that what the Philippines has done is to internationalize the issue more than anyone else, and that has raised the ire of China,” said Carl Baker, director of programs at the Washington, D.C.-based Pacific Forum CSIS think tank.

“I think China is pretty comfortable with its position and will continue to change ‘facts on the ground’ by sustaining patrols in the region to protect and police fishing,” Baker said. “In the meantime, the Philippine government is clearly working to bolster relations with [other countries] to offset the Chinese influence.”

Jennings is a special correspondent