END_OF_DOCUMENT_TOKEN_TO_BE_REPLACED

Leaders pose for a photo with delegates from the military during a tea-break at the 11th National Congress of the Communist Party in Hanoi on Jan. 18, 2011
Kham / Reuters

Sarcastic observers joked that the scene — the monotonous non-event held every five years that has become Vietnam’s 11th National Party Congress — summed up the obsolescent state of the communist party itself. For a week starting last Wednesday, 1400 delegates gathered in the capital of Hanoi to set the party’s strategy and voted out some older members of its gray-haired leadership. The outcome? Much of the same, but with a few younger faces — an increasingly rare species in a country where many business-oriented youth no longer join need to join the party. A third of the party’s 15-man politburo, the most powerful committee in the country, stepped down, some citing their ages and health concerns.

END_OF_DOCUMENT_TOKEN_TO_BE_REPLACED

By John Ruwitch and Jason Szep

Flush with cash from his annual bonus, he wanted to buy his wife a new mobile phone, a gift for the coming Tet lunar new year holidays. In a country where the average annual income is about $1,100, a good phone is a big investment. Tai wanted to make the right choice with his 5 million dong ($250).

END_OF_DOCUMENT_TOKEN_TO_BE_REPLACED

DON’T GET TOO TIRED FOR LOVE,
DON’T LET IT END. (oo-)
DON’T SAY GOODNIGHT TO LOVE,
IT MAY NEVER BE THE SAME AGAIN.

END_OF_DOCUMENT_TOKEN_TO_BE_REPLACED

The growth of China’s military is shrouded in secrecy which could give rise to “misunderstanding and miscalculation”, a US defence department report says.

China has been upgrading its land-based missiles, expanding its submarine force and nuclear arsenal, the Pentagon’s annual report to Congress said.

END_OF_DOCUMENT_TOKEN_TO_BE_REPLACED

The guided missile carrier USS McCain and the aircraft carrier USS George Washington are taking part in the non-combat training exercises in the South China Sea.

The exercises celebrate 15 years of diplomatic ties between the former enemies after aggressions ended in 1975 when the communists over ran the South Vietnamese capital Saigon, now called Ho Chi Minh City.

END_OF_DOCUMENT_TOKEN_TO_BE_REPLACED

WASHINGTON – More than 30 years after his death, an Air Force general has been exonerated of charges that he violated presidential restrictions on aerial bombing during the Vietnam War and that he ordered the falsification of records to conceal the missions.

John D. Lavelle was forced to retire in April 1972 at the rank of major general — two stars below the rank he held as commander of air operations in Vietnam — after being relieved of duty for ordering unauthorized airstrikes against North Vietnamese military targets. 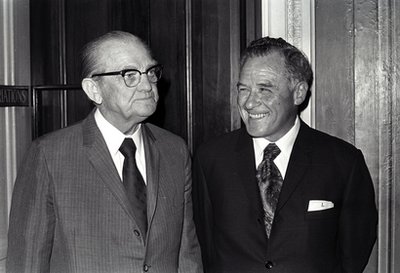 END_OF_DOCUMENT_TOKEN_TO_BE_REPLACED

Seal that prompted the FBI action

A row has broken out between Wikipedia and the FBI over the use of its seal.

In a letter sent to Wikipedia’s San Francisco office, the FBI said that “unauthorised reproduction of the FBI Seal was prohibited by US law”.

“Whoever possesses any insignia…or any colourable imitation thereof..shall be fined…or imprisoned… or both,” the FBI wrote.

END_OF_DOCUMENT_TOKEN_TO_BE_REPLACED

China has announced a number of military exercises in recent weeks

A large airborne military exercise is underway in China’s central and eastern provinces and seas.

Fighter jets, spy planes and helicopters, along with 12,000 soldiers, are taking part in the drill.

It is one of several announced in official media in recent weeks.

The exercise follows verbal sparring between the US and China over conflicting territorial claims by China and many South East Asian nations in the South China Sea.

END_OF_DOCUMENT_TOKEN_TO_BE_REPLACED

Up to two-and-a-half million people have been affected by devastating floods in north-west Pakistan, the International Red Cross has said.

Rescuers are struggling to reach 27,000 people still cut off by the floods, which are the worst in 80 years.

At least 1,100 people have died and thousands have lost everything.

END_OF_DOCUMENT_TOKEN_TO_BE_REPLACED

A Chinese defense official is criticizing the United States for taking an interest in a South China Sea dispute for the second time this week.

Ministry spokesman Geng Yansheng said Friday that remarks last week by U.S. Secretary of State Hillary Clinton were an unwelcome attempt at the “internationalization” of a territorial issue involving the Spratly and Paracel chains.  China’s foreign ministry made similar remarks earlier this week.

END_OF_DOCUMENT_TOKEN_TO_BE_REPLACED

Gen Bigeard was a veteran of WWII, French Indochina and Algeria

Vietnam has turned down a request to scatter the ashes of a French war veteran at the site of a battle which helped end colonial rule by France.

General Marcel Bigeard, one of France’s most decorated soldiers, who died last month, reportedly asked to rejoin his fallen comrades.

But a Vietnamese official is quoted as saying this would “create a precedent”.

END_OF_DOCUMENT_TOKEN_TO_BE_REPLACED

By the CNN Wire Staff

(CNN) — Vietnam’s Ministry of Information and Communications has cut off overnight public Internet access in businesses and banned advertisements of online games pending new regulations amid a public outcry over the games’ influence on youth, the state-run news agency reported.

The move also temporarily stopped the licensing of online games. Vietnamese officials announced the decision Tuesday and said it would remain in effect until the end of the year.

END_OF_DOCUMENT_TOKEN_TO_BE_REPLACED

North Korea says it will use its “nuclear deterrent” in response to joint US-South Korean military exercises this weekend.

Pyongyang was ready to launch a “retaliatory sacred war” at any time, the state-run Korean Central News Agency (KCNA) said.

Washington and Seoul say the war games are to deter North Korean aggression.