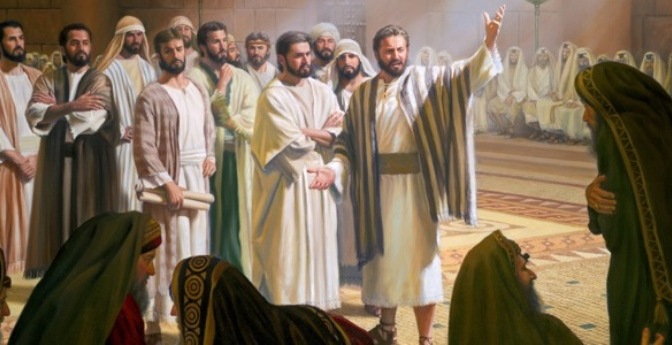 Acts is the fifth book of the New Testament, after the four Gospels. Acts tells things that apostles of Jesus Christ did after Jesus was executed. Acts 4 means Chapter 4 of Acts.

Peter and John before the Sanhedrin

4 The priests and the captain of the temple guard and the Sadducees came up to Peter and John while they were speaking to the people. 2 They were greatly disturbed because the apostles were teaching the people, proclaiming in Jesus the resurrection of the dead. 3 They seized Peter and John and, because it was evening, they put them in jail until the next day.

The Sadducees were Jewish religious leaders, but they did not do their spirituality works. They only used the law to oppress the people.

Peter (Saint Peter) and John (John the Apostle) were two of the twelves apostles of Jesus Christ. Peter was also the “Apostle of the Apostles”.

In this case, the Sadducees went with the priests and the captain of the temple guard to seize Peter and John, because the apostles were teaching the people and proclaiming in Jesus the resurrection of the dead.

4 But many who heard the message believed; so the number of men who believed grew to about five thousand.

A lot of people believed in Peter and John’s teaching. Because they were choking on Jewish religious laws, they easily loved the spirit of Jesus – the equality and unconditional love.

These laws did not remove their sins, but only were used to judge if they had sins or not. This meant the laws made them die with their sins. And Jesus redeemed their sins, and made them live.

5 The next day the rulers, the elders and the teachers of the law met in Jerusalem. 6 Annas the high priest was there, and so were Caiaphas, John, Alexander and others of the high priest’s family. 7 They had Peter and John brought before them and began to question them: “By what power or what name did you do this?”

“The name” (in the name) is a very meaningful thing in the Bible culture.

But in the culture of Abrahamic religions – Judaism, Christianity and Islam – “the name” is a very meaningful thing:

– In The Ten Commandments, God spoke: “You shall not misuse of the name of the Lord your God, for the Lord will not hold anyone guiltless who misuses his name.”

“The name” is a very meaningful thing. So the rulers, the elders and the teachers of the law asked Peter and John: “By what power or what name did you do this?”

8 Then Peter, filled with the Holy Spirit, said to them: “Rulers and elders of the people!

The Holy Spirit (or Spirit, Spirit of God) gives us wisdom and strength.

(In the Trinity: God the Father is justice. God the Son is love. God the Holy Spirit is wisdom and strength.)

The Holy Spirit has many different forms in the Bible: doves, wind, tongues of fire, etc…

Peter was a fisherman and was unschooled. Thanks to the Holy Spirit, Peter said to the rulers, the elders and the teachers of the law with wisdom and strength.

9 If we are being called to account today for an act of kindness shown to a man who was lame and are being asked how he was healed, 10 then know this, you and all the people of Israel: It is by the name of Jesus Christ of Nazareth, whom you crucified but whom God raised from the dead, that this man stands before you healed. 11 Jesus is

“‘the stone you builders rejected,
which has become the cornerstone.’[a]

12 Salvation is found in no one else, for there is no other name under heaven given to mankind by which we must be saved.”

This means Jesus is God and is Messiah. Jesus was the one who was to come, so the Jews and all people didn’t need to expect someone else.

At that time, there was this thought about the Messiah (Salvation) that the Jews had waited for at least 800 years (from the Prophet Isaiah time): Messiah was the most powerful king in the world. Messiah would free the Jews from the Roman and other enslaving powers; and would turn the Jews into the world’s most powerful nation.

Yes, Jesus came and freed them. But Jesus did not free them from the Roman and other enslaving powers as they wished. Jesus freed them from mind slavery.

13 When they saw the courage of Peter and John and realized that they were unschooled, ordinary men, they were astonished and they took note that these men had been with Jesus. 14 But since they could see the man who had been healed standing there with them, there was nothing they could say. 15 So they ordered them to withdraw from the Sanhedrin and then conferred together. 16 “What are we going to do with these men?” they asked. “Everyone living in Jerusalem knows they have performed a notable sign, and we cannot deny it. 17 But to stop this thing from spreading any further among the people, we must warn them to speak no longer to anyone in this name.”18 Then they called them in again and commanded them not to speak or teach at all in the name of Jesus. 19 But Peter and John replied, “Which is right in God’s eyes: to listen to you, or to him? You be the judges! 20 As for us, we cannot help speaking about what we have seen and heard.”

21 After further threats they let them go. They could not decide how to punish them, because all the people were praising God for what had happened. 22 For the man who was miraculously healed was over forty years old.

Thank you, sisters and brothers.