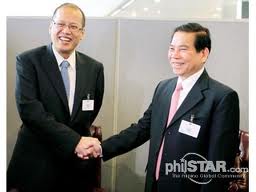 HANOI, Vietnam — President Aquino and his counterpart Nguyen Minh Triet have joined mounting calls for the junta-ruled Myanmar to release Aung San Suu Kyi in time for the country’s Nov. 7 national elections, the first for the last 20 years.

“We have been championing the cause of Madam Aung San Suu Kyi for a very, very long time. The basic premise is stability (in) one of the member states of the ASEAN… leads to the stability within ASEAN,” he told Manila-based reporters here.

Mr. Aquino, son of democracy icon, the late President Cory Aquino and slain martyr Sen. Benigno Aquino Jr., whose fight against the late dictator Ferdinand Marcos led to the restoration of democracy in 1986, said his heart goes out to Ms. Suu Kyi.

“Next year will be the 25th anniversary of our own people power revolution. We succeeded in a transition that is relatively peaceful. So, we will just remind them of certain promises that were made quite a number of years back,” he said at the Grand Plaza Hotel here.

According to Secretary Ricky Carandang, who was present at the meeting of the two heads of state, Mr. Aquino and the Vietnamese leader have “agreed that Myanmar should do more to move toward democracy.”

Earlier, the Department of Foreign Affairs said Aquino would urge the junta-ruled Myanmar, which would hold its first national elections in two decades on Nov. 7, to stand by its commitment for full democratization.

Aquino will also call for the unconditional release of all political prisoners, which include Nobel Peace laureate and democracy leader Suu Kyi “as a gesture of goodwill,” the DFA said.

Military rulers of Myanmar have jailed thousands of people in their efforts to crush all dissenting views, the most prominent of whom is Aung San Suu Kyi, who has been the beacon of hope and change in Myanmar, the Southeast Asian nation formerly known as Burma.

Aung San Suu Kyi co-founded the National League for Democracy (NLD), a pro-democracy political party that sought to counter the military junta that reigned over Myanmar since 1962.

In 1990, the NLD won almost 80 percent of the parliamentary seats in a general election. Surprised at the landslide victory, the military junta refused to transfer power to Aung San Suu Kyi and the NLD, and jailed scores of political activists.

For 14 of the past 20 years, Aung San Suu Kyi has endured unofficial detention, house arrest and restrictions on her movement. She continues to be held under house arrest in Yangon.

Amnesty International seeks the immediate and unconditional release of Aung San Suu Kyi and all prisoners of conscience in Myanmar.